A century ago, in the years following World War I and the 1918 flu pandemic, higher education reformers took aim at the American research university. In the “hour for experiment” that ensued, innovators developed alternative models of higher learning that eschewed research for authentic learning, including the Socratic method (Deep Springs College, 1917), adult education (the New School, 1919), the Oxbridge tutorial system (Sarah Lawrence College, 1926), euthenics — an early self-improvement movement (Bennington College, 1932), and the experimental arts (Black Mountain College, 1933, deemed by John Dewey a “living example of democracy in action”).

That crisis response established a pattern that would be repeated many times over: when institutions fail, academic entrepreneurs establish new spaces for learning outside existing structures. The unmediated intellectual experiences of such spaces as salons were celebrated by the sociologist Marianne Weber in her 1948 tribute to “academic conviviality.”

No institution will emerge unscathed by the current crisis. Colleges that were in distress before may not survive the added financial and enrollment pressures that will cascade through the system. Such closures will be devastating to students, faculty, staff, communities and alumni. And even the strongest universities are likely to see transformative changes.

But despite the challenges and instability facing learning institutions, and the personal interruptions of all our lives, learning is still happening — perhaps more than ever. As in previous crises, it is happening in new ways and in different spaces, such as the conferencing system Zoom and the open learning platform Coursera. These moves may hold clues for possible directions for higher education after the pandemic subsides.

In the past weeks, both of our institutions, Duke University and Stanford University, among others, temporarily adopted satisfactory/no credit. While designed to reduce student stress in the short term, “ungrading,” even if instituted only for first-year students (as at MIT), could in the long term encourage academic breadth and exploration.

That exploration has already begun. Coursera reports an immense increase in enrollments — much of which is outside the system of credit — since America’s college students went home. In the last four weeks, enrollments grew 370 percent compared to the same period last year. Enrollments from new learners grew almost fivefold. 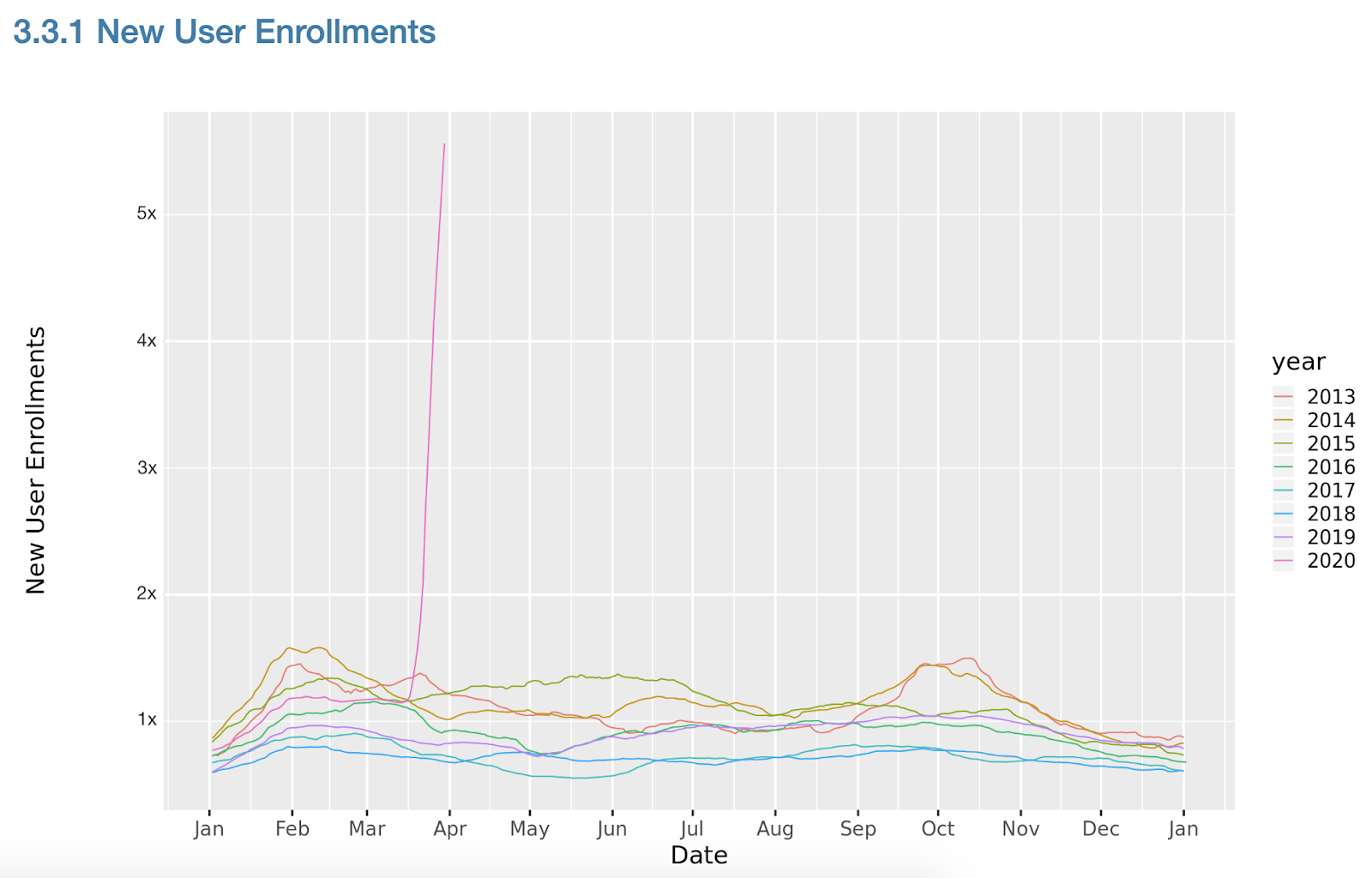 And while one might assume that most are seeking practical, marketable skills, in fact the biggest growth was in personal development, the arts and humanities, and social sciences, which collectively grew 780 percent from the same period last year. The most popular course on Coursera right now? The Science of Well Being with Yale psychologist Laurie Santos, which added one million learners in March.

One rather prominent student posted to social media recently about how a course on ancient philosophy was making her “confinement productive.” Shakira and her 66 million followers are among the half of humanity on lockdown who have flocked to learning for its own sake.

When humanity is under threat, humans crave the humanities. When we are required to do social distancing, we seek opportunities for distant socializing.

When higher education emerges from the upheaval of COVID-19, there will be opportunities to retain what is good from this moment. In normal conditions the fundamental need to learn is too often thwarted by the pressures of grades and jobs. While the current remote teaching effort is far from ideal, the skills that faculty members and students are now acquiring will surely bear fruit in new learning designs.

There is no doubt that in previous crises entrepreneurs have uncovered opportunities to found new institutions. But established institutions should also strive to grow from this moment.

Northeastern University has organized a task force to gather the lessons of this experience to “reimagine” the university. Stanford is convening “a recovery team to think through how we will manage the aftermath of this crisis and get our campus back to a new normal.”

That new normal should preserve the most promising aspect of the crisis response by restoring learning to the center of higher education.

Moving Into the Long Term

A Day in the Life of a Remote Undergraduate Student: Fall 2020

A Day in the Life of a Remote Instructor: Fall 2020

Crisis and Opportunity for Faculty Development